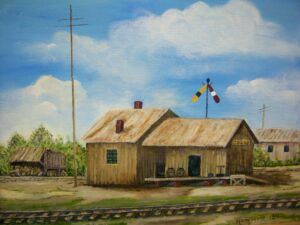 Chubb (railway station) - along with Fort Cummings (1818), Wahneta, New Armenia, Bartow Junction, and Fargo - is just one of the early names used to identify the area now known as Lake Alfred. Centrally located in Polk County, Florida, the name was said to be acquired from the beautiful lake within the community. Tradition states the lake was named after Alfred Parslow, a pioneer citizen and an early real estate and railroad prospector. Incorporated as the City of Fargo in 1913, the name officially changed to the City of Lake Alfred on May 29, 1915.

In Florida, young communities sprouted along the line of the railroad. Early settlers of the area tell tales of mosquito-infested swampland, wild boar, and varieties of poisonous snakes. In the late 1800s a lumber/sawmill, turpentine still, and crate mill were the main industries supporting the local residents. Upon depletion of the timberland, citrus groves became the staple of life. It was reported in 1915, a typhoid fever epidemic struck the area and a number of people died. Testimonial accounts share that at the peak of the operation of the mill and still, there were about one hundred families living in the area comprised of Caucasians, African Americans, and Armenians.

The first efforts of the formal establishment came in the forms of a boardinghouse, school, post office, a few churches and electricity, with the modern roads following in 1915 to 1917. As Lake Alfred flourished along came the people. 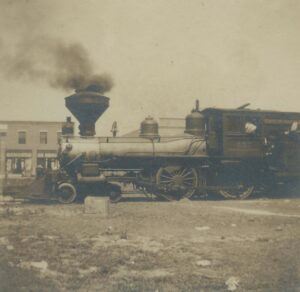 One Lake Alfred resident shared a story about "Peggy", the local train. Peggy's job was to transport people, fruit, and market items to various train depots between Lake Alfred and Bartow for further distribution. Lake Alfred was the final destination traveling away from Bartow. In order for Peggy to return to her parent station, all of the available residents, train crew, passengers, and children would have to push the unhooked engine around on manual turntable so the locomotive would join the railcars facing backward and push, rather than pull, the load back into the City. This process was reversed in Bartow and Peggy would pull the train back into Lake Alfred on the next trip.

Today the City of Lake Alfred still retains much of its original small-town ambiance but is unique in many ways. With slightly over five thousand citizens, Lake Alfred's "success" is more than apparent in our exceptional schools, outstanding public services, Mackay Gardens and Lakeside Preserve, and community events. Come visit, and learn why people from all over the world call Lake Alfred home. We're a great hometown for all ages - and newcomers are always welcome!